The butterfly park or often called Bali Butterfly Park is located on one hectare of land consisting of parking lots, butterfly museums, cages and restaurants and a garden that is topped with nets. With the garden topped with a net it is useful so that butterflies cannot get out of the park. This butterfly garden is filled with a variety of flower gardens. The flower buddies adjust to the ideal habitat for butterflies. So that these beautiful winged insects can still live according to their original habitat.

Indonesia is a country that has the third largest forest and has the second richest biodiversity in the world that has enormous potential for its natural charm. Indonesia is also known as the Kingdom of Butterfly because of the diversity of species / species of butterflies and also insects that live in many parts of the Indonesian land which are spread in various regions with various species that have beautiful and beautiful shapes and colors.

History of Tabanan Bali Butterfly Park Butterfly Park
The history of the establishment of the Bali Butterfly Park Tabanan began with the holding of the International Butterfly Conference in Ujung Pandang on August 23-27 1993 by the Ministry of Tourism of the Republic of Indonesia. The conference which was attended by butterfly experts from inside and outside the country discussed about the richness of butterflies owned by Indonesia as well as sustainable management and utilization efforts while introducing natural butterfly gardens in Bantimurung South Sulawesi to the world of tourism to become an example for the establishment of other butterfly gardens.

After the conference ended, several domestic participants including PT Ikas Amboina gathered to discuss the essence of the meeting, namely the preservation and utilization of butterflies through tourism activities, how to create replicas of natural butterfly parks such as those in Bantimurung and how to preserve and utilize butterflies on an ongoing basis. Three months after the holding of the conference in Ujung Pandang, precisely November 28, 1993, PT Butterflies Taman Lestari was formed as the manager and founder of the butterfly park named Bali Butterfly Park. 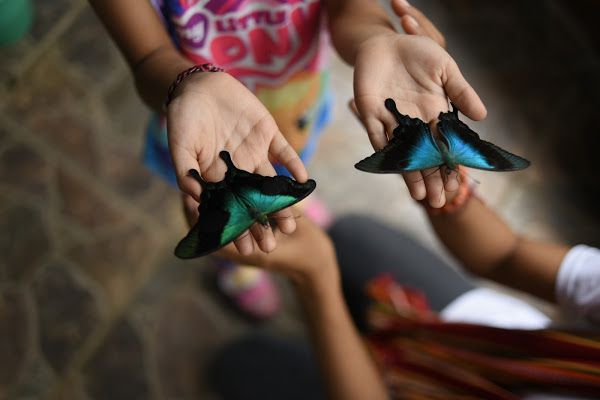 The construction of Bali Butterfly Park by PT Kupu-kupu Taman Lestari began after obtaining approval from the central and regional governments and from the local community. After nearly three years of building, on December 17, 1996 Bali Butterfly Park was officially opened as one of the natural attractions and education, and was inaugurated by Ms. Asiawati Oka, Chair of the Bali Province PKK Team.

This Butterfly Park has an area of ​​1 ha, consisting of 3,700 m² for butterfly habitat and the remaining 6,300 m² is used for flower gardens as plants and plants that are used as food and the process of cultivating butterflies and tourist infrastructure. There are five types of cages that are used during the process of breeding butterflies, including reproductive cages, egg raising cages, larval nurseries, cocoon cages, and butterfly cages.

Tour to nature with impressive views of Mount and Lake Batur, where this tour is certainly also very refreshing because it is located on a plateau in Bali.

Witness the amazing sunset at Pura which is located on the steep cliffs of the southern end of Bali Island, with a combination of traditional Kecak dance performances. End with a beautiful dinner on the edge of Jimbaran beach.

Here are the popular attractions that are closest to Bali Butterfly Park. Where you can choose to see nearby objects or activities that you might know and like.

If you have interest to Bali Butterfly Park, you can freely add it as reference to your Bali Tours future plan.

*By adding objects into the plan, You are creating Your own itinerary and You are free to determine the travel plan you want. You will only pay for transport costs and all expenses at the tourist attraction are entirely will be your expenses.

Bali Tourism Attractions References
Find out more about the Most Popular Travel Destinations in Bali.

A different kind of Bali Tour

Are include in below Tour Package(s)